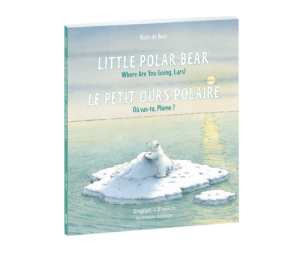 Kensington, MD – The Noyes Children’s Library Foundation presents Little Polar Bear – Where are You Going Lars? by Hans de Beer, as the tenth free Noyes StoryWalk®. Families are invited to read the book in French and English on panels posted in the windows of shops and restaurants on Howard Avenue and Armory Avenue in Kensington, MD. The Little Polar Bear Noyes StoryWalk® will run from January 15 to February 6, 2022.

Little Polar Bear – Where are You Going Lars? tells the story of a young polar bear whose father takes him out for first hunting excursion. That night he is so tired from all his lessons that he falls fast asleep. He sleeps so soundly that he doesn’t hear the ice crack, doesn’t feel himself slowly drift away from his father and the North Pole, and doesn’t realize that his adventures have just begun. This is the first book in a classic series, and the story is presented in both English and French.

The StoryWalk® begins at the Town of Kensington Kiosk at M&T Bank at 3706 Howard Ave., Kensington, and winds along Kensington’s historic shopping district before finishing at Frankly … Pizza! at 10417 Armory Ave., Kensington. The Noyes Children’s Library Foundation partnered with Jennifer Fulton at Bonjour Books on Howard Ave. and the Kensington business community to present this StoryWalk.

Get updates on Town announcements, meetings and happenings to your email.

The Town office is open from 8 am to 4 pm Monday through Friday where Town staff is available to assist you.